Please support our events.
Any donation is really appreciated 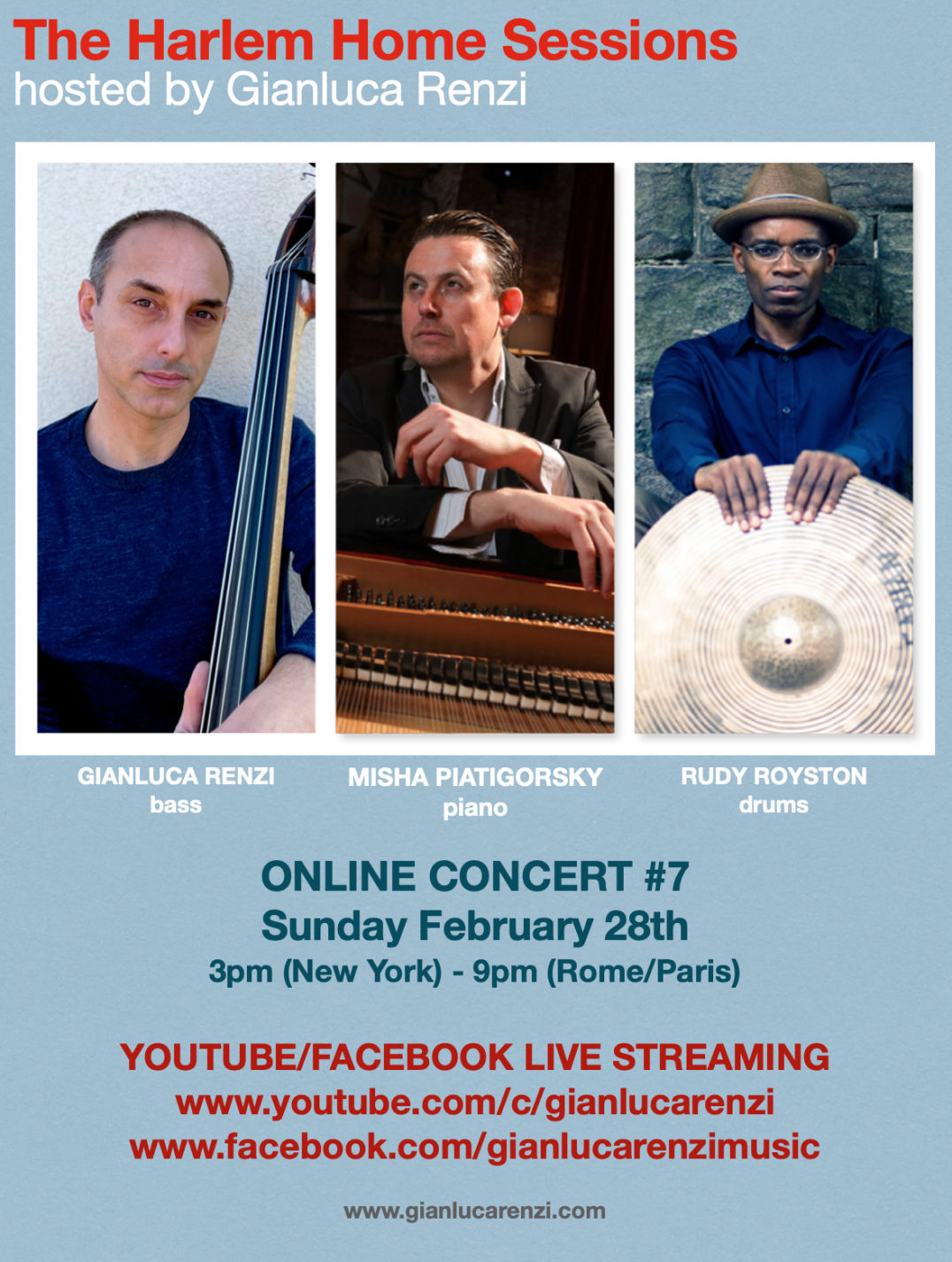 
Misha Piatigorsky is a vibrant jazz pianist, composer and producer, hailed by the Boston Globe as the artist who “beautifully merges the worlds of serious jazz and pop,” — Misha blends powerful melodies with an unusual harmonic sensitivity. It's a sound with a deeply personal yet cosmopolitan dimension, reflecting his experience as a Russian-Jewish émigré growing up in urban America. The great nephew of legendary cellist Gregor Piatigorsky, with international upbringing followed by international acclaim, he works in New York City to advance the modern jazz sound beyond the standards. He leads a number of projects including The Sketchy Orkestra – his innovative ensemble band some 20 people strong. 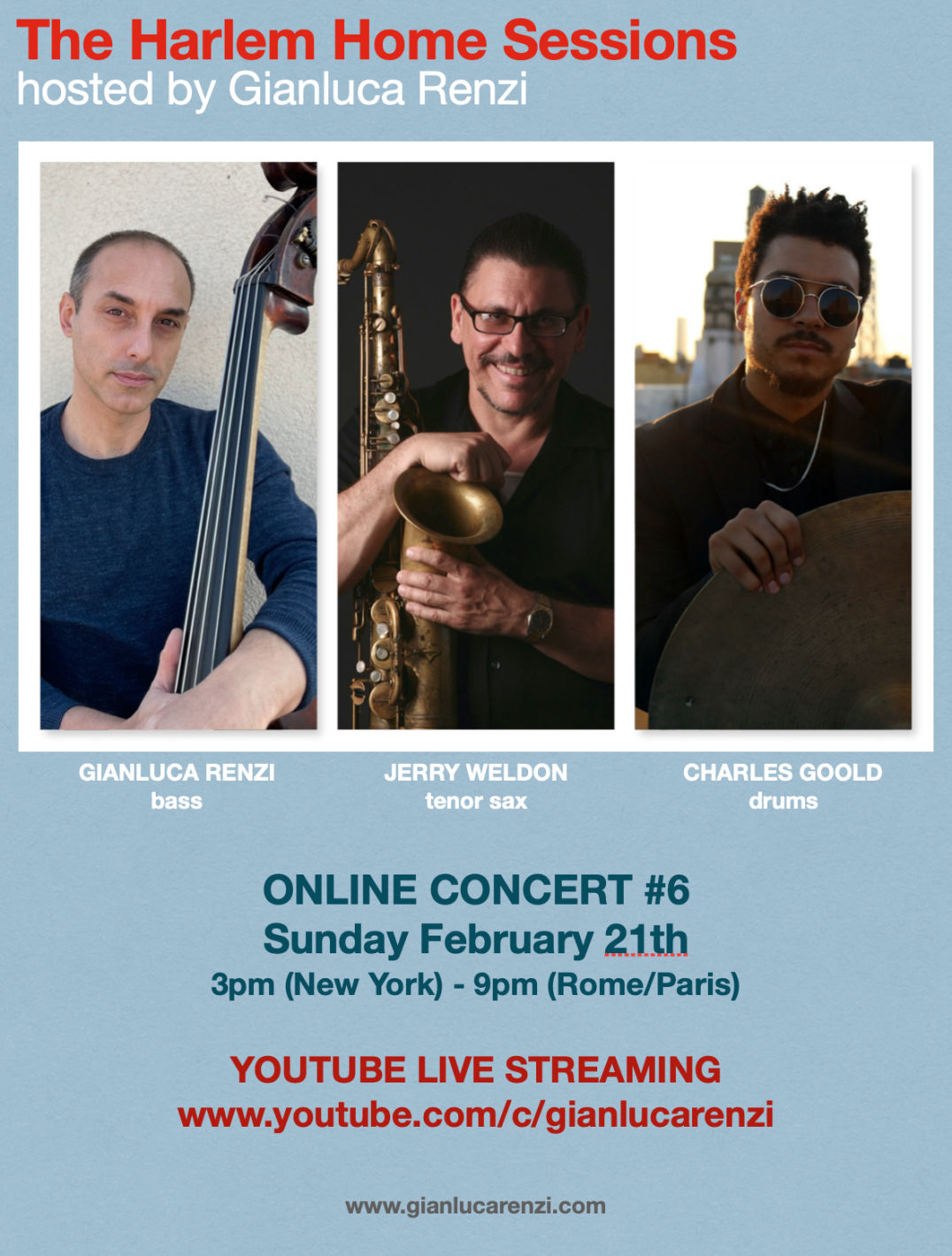 Internationally renowned veteran sax man Jerry Weldon, has been a player on the jazz scene for more than 35 years. With eight CD’s as a leader and more sideman sides than even he can count…or remember, this native New Yorker’s performance/recording résumé reflects his venerable tenor tenure and reads like a virtual "Who's Who of Jazz." In 1990, Jerry became a charter member and featured soloist with Harry Connick Jr.'s newly formed big band. Since then Jerry has toured the U.S., Europe, Asia and Australia with Harry and was also part of Connick's Broadway musical production, "Thou Shalt Not" and appeared on stage as well as in the orchestra.

Rising star jazz drummer Charles Goold, is one of New York City's hardest working drummer of his generation. Born to an American jazz saxophonist father and a Haitian immigrant mother, Goold has used these influences to shape his voice and message in the Jazz community. Goold has performed with a wide variety of acts across varying styles from Wynton Marsalis and the Jazz at Lincoln Center Orchestra, John Hendricks and Johnny O’Neal to rap icons Cam’ron, Talib Kweli, and Ghostface Killah. 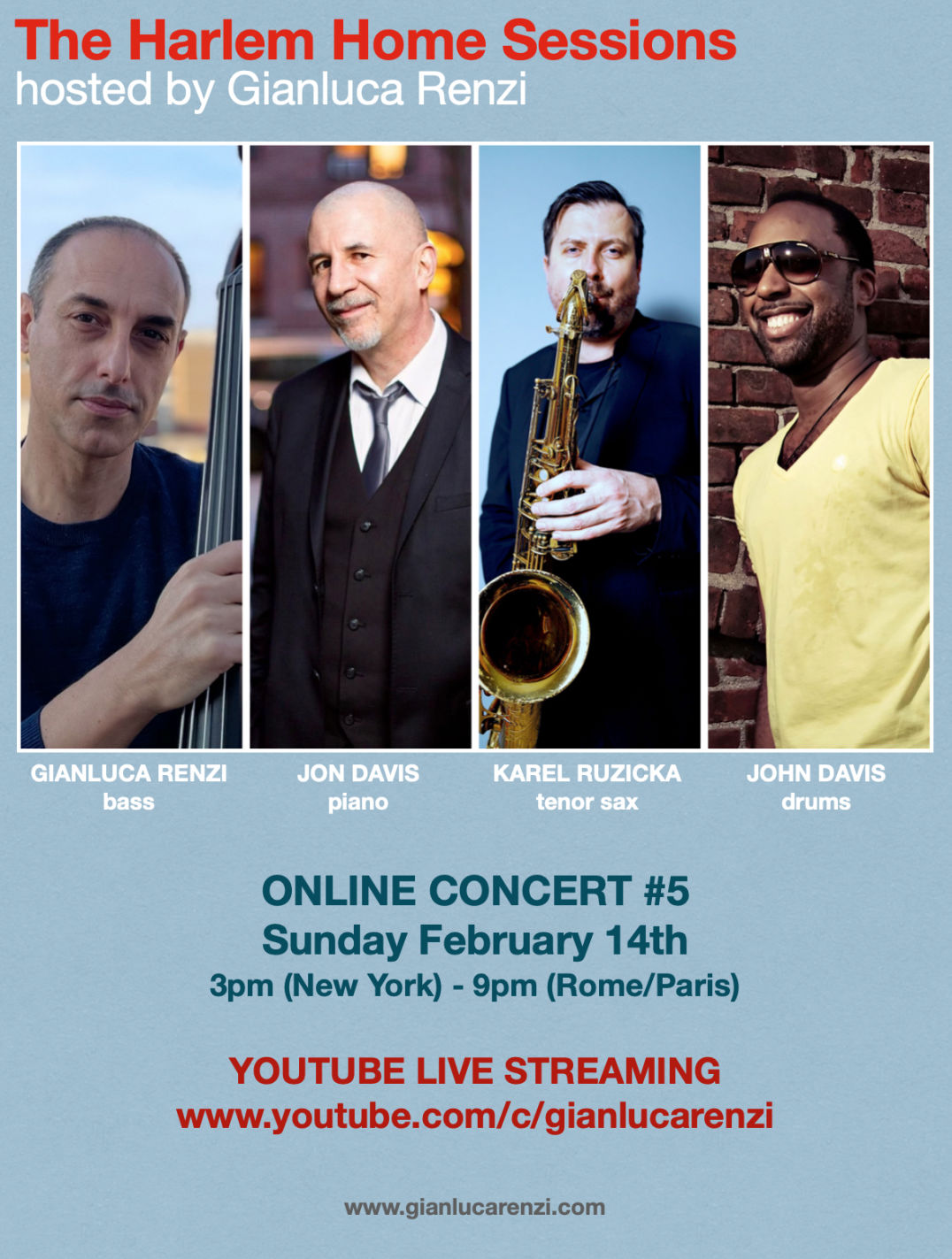 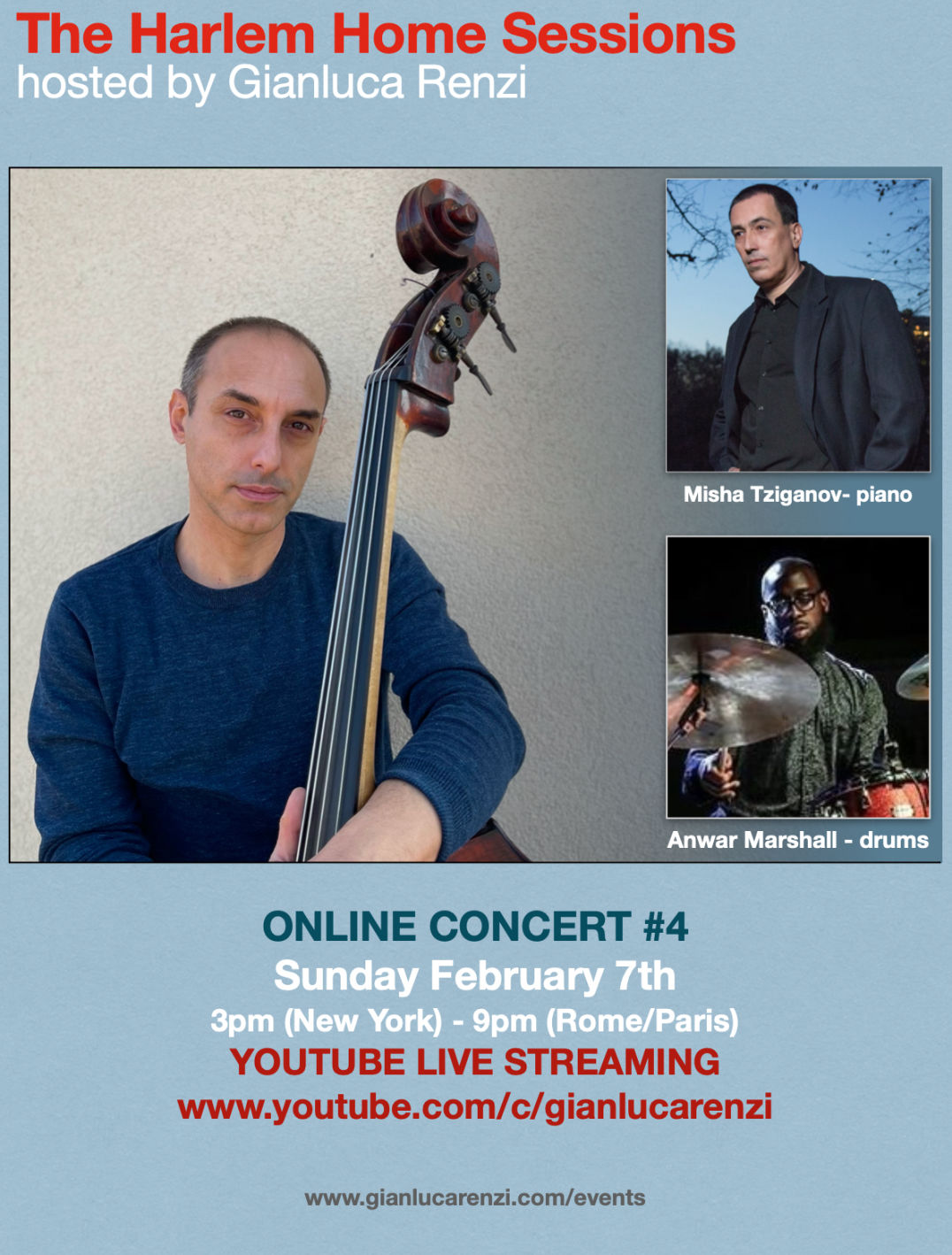 
Misha Tsiganov is Grammy Nominated pianist, he was born in St. Petersburg, Russia and graduated from Mussorgsky College of Music. He won the Prize-winner-diploma of the All-Russia Jazz Competition (1990), he has worked as the featured pianist on the Bill Cosby TV show Little Bill (1999-2002). He has been the regular pianist for legendary drummer JOE CHAMBERS (2004-2008)and he is a voting member of the Recording Academy for the Grammy Awards (2016-present).
Misha has performed with Clark Terry, Michael Brecker, Wynton Marsalis, Randy Brecker, Joe Chambers, Gary Bartz, Claudio Roditi, Chico Freeman, Antonio Sanchez, Donny McCaslin, Alex Sipiagin and many others.

Anwar M. Marshall is a rising star in the Jazz Scene. He attended the High School for Creative and Performing Arts (CAPA) and received his Bachelor’s degree from the University of the Arts where he studied with Erik Johnson and Joe Nero. At his young age he has collaborated already with musicians such as Pat Metheny, Christian McBride, Robert Glasper, Orrin Evans, The Captain Black Big Band, Ed Cherry, Tim Warfield, Dave Douglas, Adam Blackstone, Somi, Kurt Rosenwinkel, Peter Bernstein, and John Swana. He is also co-leader of a ten-piece ensemble, the Fresh Cut Orchestra, with trumpeter Josh Lawrence and Jason Fraticeli. 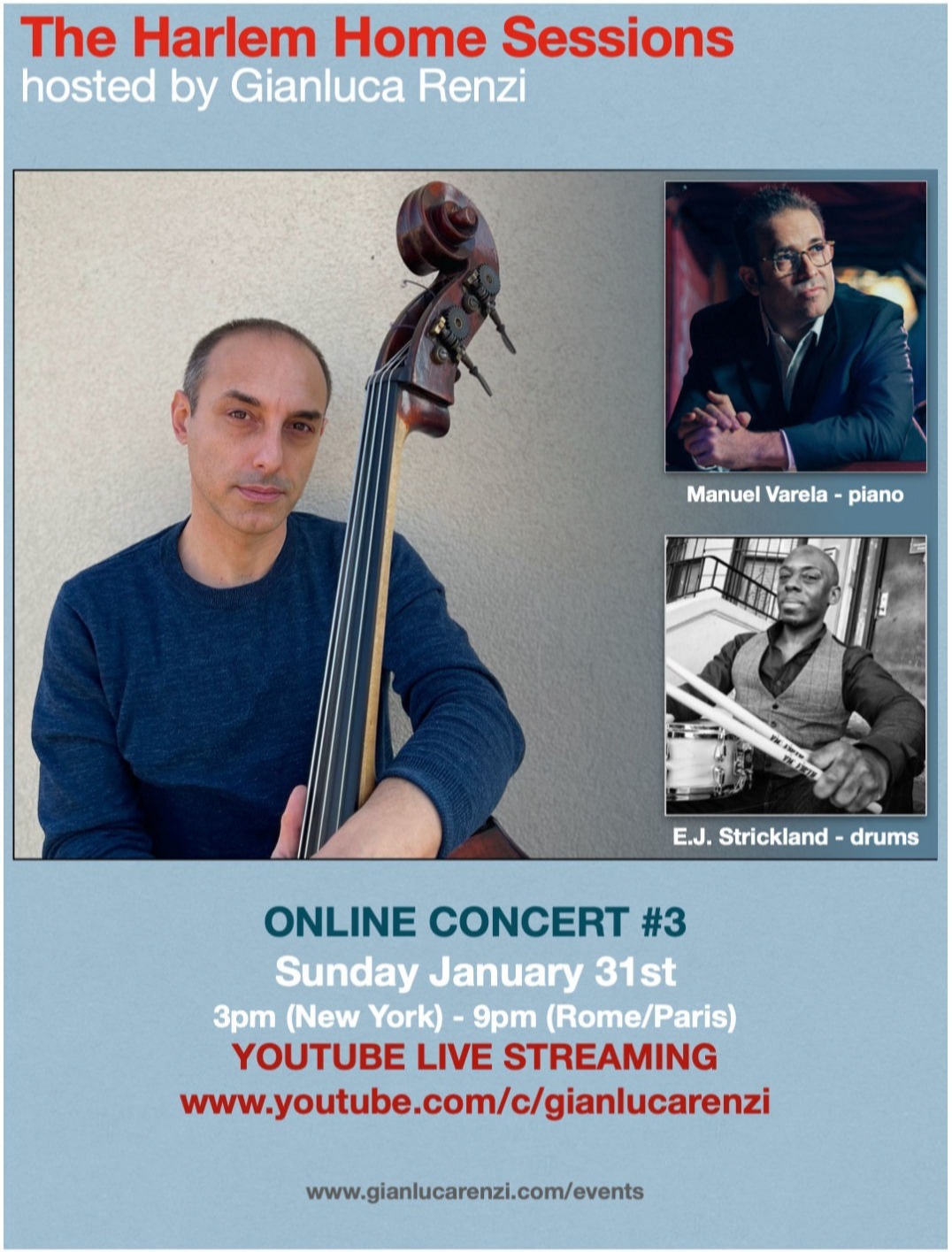 Based in New York City, Grammy nominated artist, pianist and composer Manuel Valera was born and raised in Havana, Cuba. Since arriving in NYC, he has performed with Arturo Sandoval, Paquito D’Rivera, Brian Lynch, Dafnis Prieto, Jeff “Tain” Watts, John Benitez, Samuel Torres, Joel Frahm, Yosvany Terry among many others.
Valera is also the leader of his working band Manuel Valera and the New Cuban Express, a project deeply influenced by the experiments of Cuban artists from the 70s and 80s.

Enoch Jamal "E.J." Strickland is the world-class, world-traveled drummer, composer, educator, and artist you've heard on over 60 albums in the last 10-plus years. Strickland has built a successful career as a composer, bandleader, educator, and sideman. He's toured, performed, and recorded with some of the greatest names in contemporary music: Cassandra Wilson, Terence Blanchard, Lizz Wright, Wynton Marsalis, George Colligan, David Gilmore, Vincent Herring, and Nnenna Freelon, to name a few. 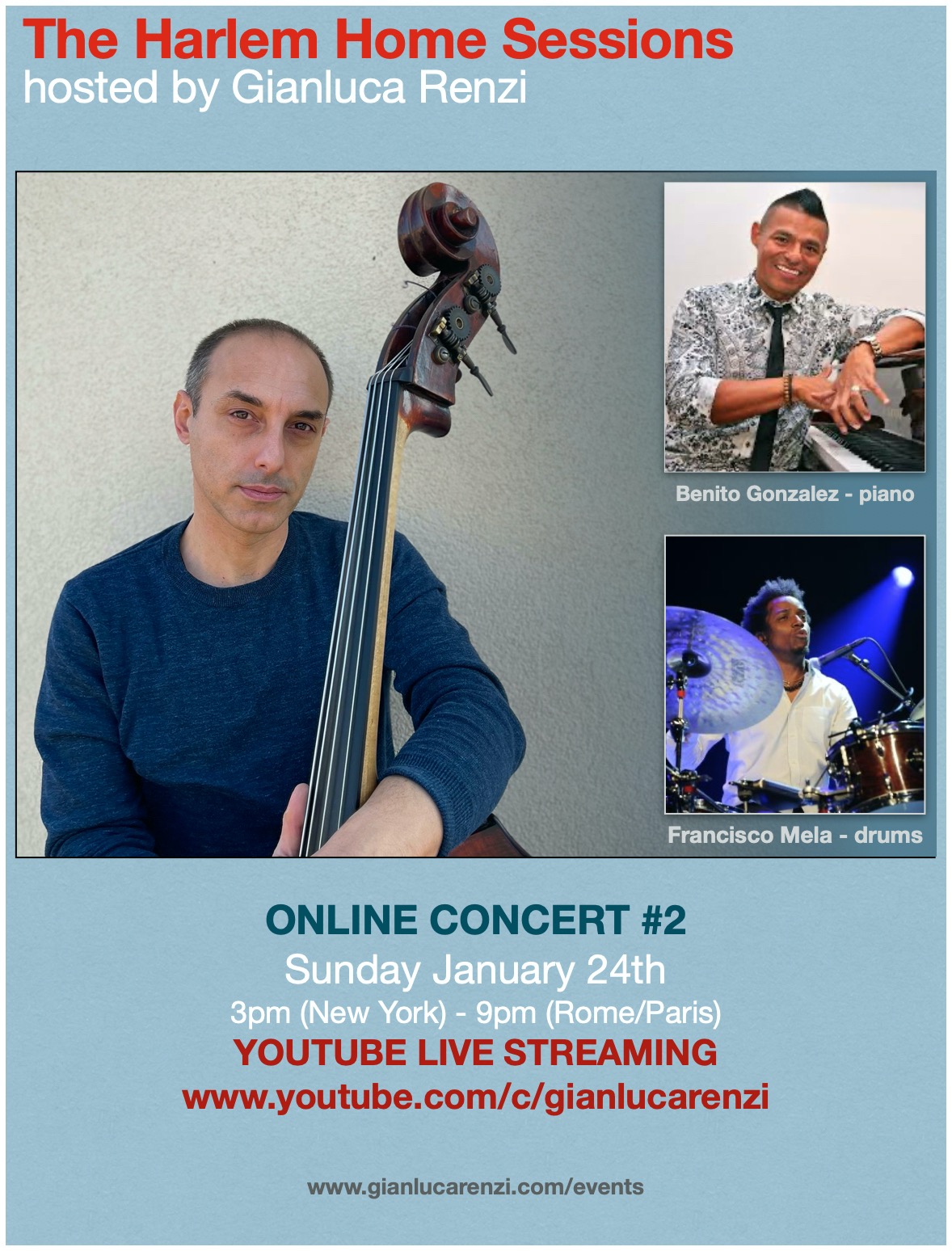 Pianist Benito Gonzalez “Two times Grammy nominee”is an internationally beloved artist who combines a long lineage of American jazz traditions with rhythms from around the world. He’s worked with dozens of the greats, and he always brings his best on stage! 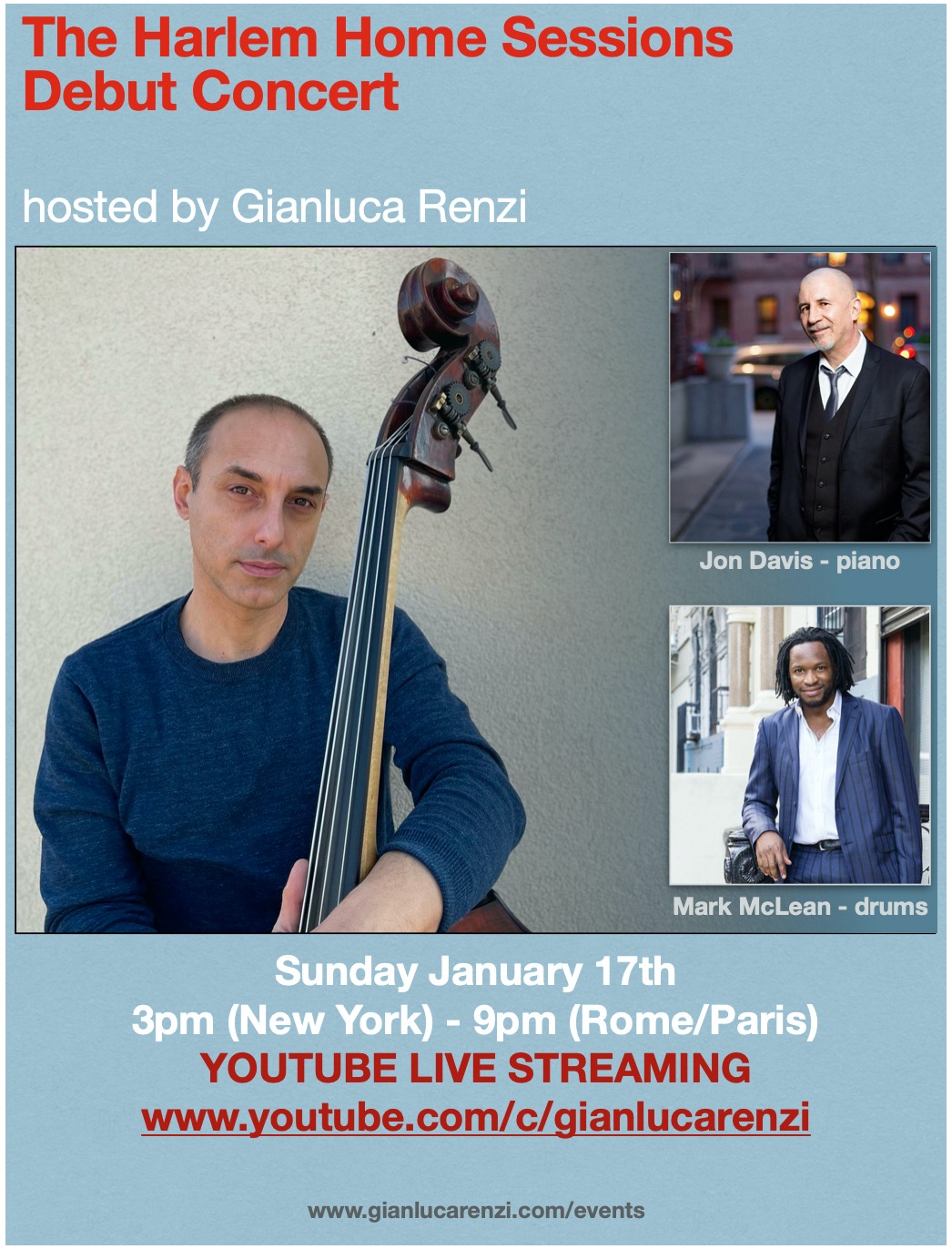 The debut concert of the Harlem Home Sessions series features two of my favorite NYC musicians. Don't miss it!
This is the first of a series of concerts from my apartment in NY. The concert is free although donations will be welcomed and appreciated. Use the links in the Youtube video caption.

Jon Davis has been performing and touring with many of the finest jazz musicians around the world for more than 25 years. He has appeared on over 50 recordings, and has contributed compositions on many of them. Although perhaps still most widely known for his association with the legendary bassist, Jaco Pastorius, Jon has shown a rare versatility ranging from solo, to Big Band, and everything in between.

Mark McLean is a very dynamic and versatile studio and touring musician. And for that reason he has been the grooving spark behind many jazz, pop and soul legends whose music and influence span multiple generations. The late legendary producer Phil Ramone, called McLean “a tasty, sure handed drummer, a song man’s musician”.